Everything I Know About Instagram’s Hashtag Problem and Shadowbanning 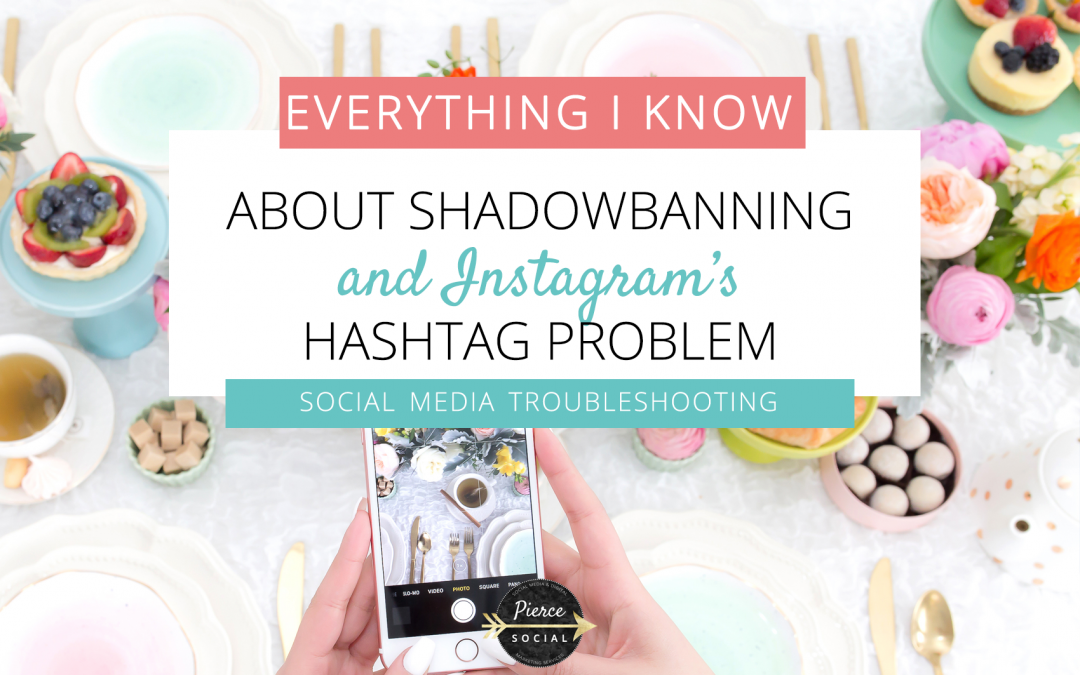 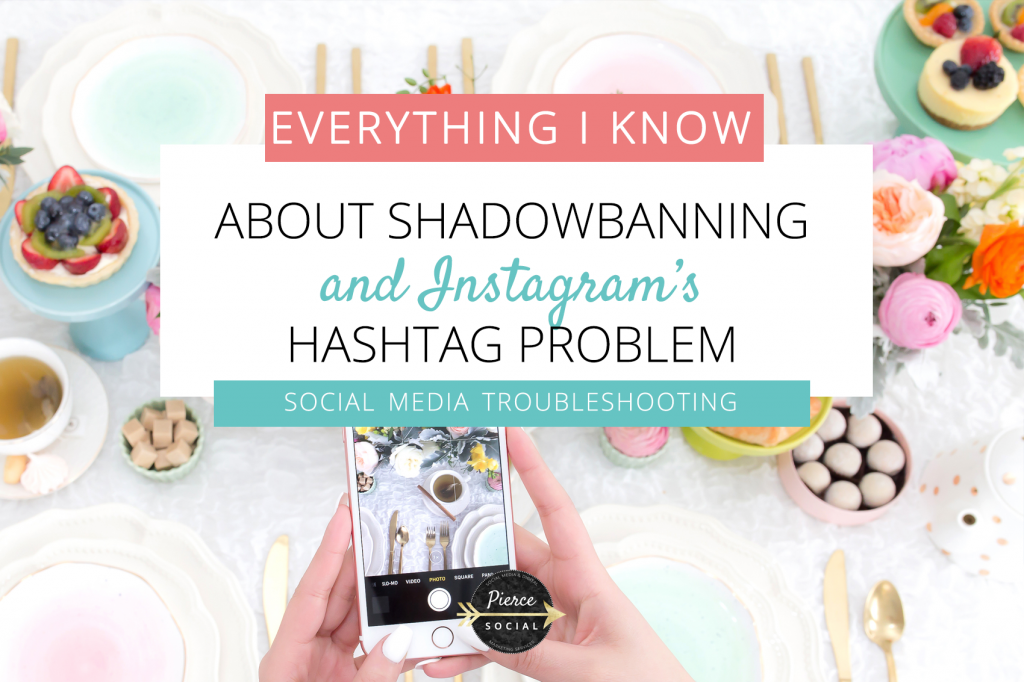 A couple of weeks ago, around the middle of March, some of the accounts I manage on Instagram saw engagement drop off by over 50%. It was kind of scary and I rode it out for a day or two to see if it was just a glitch that was being resolved. After seeing no change I did a little digging. I had seen things about hashtag problems the month prior and heard the term “Shadowbanned” a few times in some of the Facebook groups I am part of. After learning about this I checked the accounts that our engagement dropped on and it turned out that we had been, what others were calling, “shadowbanned”.

I am not sure this is even a real thing, but this term explains what people are experiencing when they try to find their photos in a hashtag feed and they don’t appear. It turns out, if you click on or search for a hashtag we thought we would see all of the photos using that hashtag in chronological order (after the top posts section), but we don’t. The accounts that have been “shadowbanned” do not appear in the hashtag feeds even if they have used the hashtags in their post UNLESS you already follow them. So, if you try to find your own photos in a hashtag feed, you will see them, so will anyone that follows you, but everyone else will not see your photos which is kind of the point, right?

Join us in our Private Facebook Group & learn from Kaitlyn & other entrepreneurs!

What I Know So Far…

I have contacted Facebook a few times before for a few reasons using the contact option in the ads manager section of Facebook. Once you find this and can actually talk to someone, they are super helpful and very nice. I reached out about this and have been a little surprised by what I learned. The Facebook rep I have been in touch with the past couple of weeks, Chad, has been incredibly nice and eager to help. I walked him through what was happening during a phone call and he then reached out to what he called the “advanced team”. Here is what I’ve learned…

Yes, that is what I have been told in a series of emails and a phone call with Facebook directly. Let me back up and explain how I got to this conclusion.

This was news to me. Before I started experiencing what people are calling “shadowbanning” I was always able to find posts in the “most recent” section of a hashtag feed under the “popular posts”. So I questioned this asked to schedule a call to walk him through my problem. We had our call and Chad told me he was sending this to his “advanced team”.

After Chad heard back from his team he sent me the following email (For reference, the hashtag we were using was #partywithpinkpoppy):

“After speaking with my advanced team, I was told this is what is referred to as intended functionality. If you search for your unique hashtag, it shows 3 pictures, but says 324 posts. That means that there has been a total of 324 posts that use that hashtag but because the hashtag is unique, it only gives a preview of the posts, which draws the users to the pictures and, in turn, to the Page. If there were more pages and people using the hashtag, more content would show but it is unique to your Page and that is why limited posts are showing.”

This answer is what started to clue me in about the algorithm, however I wasn’t satisfied because I explained this happened with all hashtags, no matter how popular, and with a few different accounts. I explained that the only people that see our posts now are people that already follow us. I asked if that is also Intended Functionality and if it is only business and accounts that are intentionally beginning to be excluded from the hashtag feeds.

I want to take a second and commend Chad. He really stuck with me through a lot of questions. He responded to my questions about business accounts with this:

“After running it by my advanced team one more time, it was reiterated that this is certainly intended functionality.
To see posts connected to a hashtag, unless it is a top post or high-volume post, the user must Follow that Page to see the Posts.

It isn’t just Business Pages, however, it is primarily.
There are individual personal pages that are in the same category.”

Naturally, I wanted to know what he meant by “personal pages that are in the same category” and how to get our posts to start appearing in the feeds again. I am still emailing and digging a little deeper. I will update this post when I know more. If you have any additional information feel free to drop it in the comments!

UPDATED: April 10, 2017 – “Essentially, the algorithm contains countless factors and for each user, it is different.”

As I mentioned above, I wanted to know more about how the algorithm works. This is all they seem to be willing to give me at this time.

“The most detail that I can provide is that there is a unique algorithm that determines what qualifies a post to be high volume. It’s a combination of Likes, Comments, Views, and about 6 other variables and factors that determine which posts go in the area for Top Posts. The Top Posts will show up at the very top and just under that is the section for Most Recent. Essentially, the algorithm contains countless factors and for each user, it is different.”

So, if you want your posts to get seen on Instagram it appears you need to do it by continuing to use hashtags but ALSO having those posts be highly engaged with out of the gate by your existing followers. Apparently there are about 6 other variables that they have not told us about that play into determining if your content is shown.

This is where forming an Instagram Pod (group of 10-12 people with a similar audience that comment on each other’s posts daily) might be highly beneficial, but we will see how that goes. We have a post on Sundays for forming these kinds of groups in our free Facebook community, The Social Boss Society. Join us anytime!

We use cookies on our website to give you the most relevant experience by remembering your preferences and repeat visits. By clicking “Accept”, you consent to the use of ALL the cookies.
Cookie settingsACCEPT
Manage consent

This website uses cookies to improve your experience while you navigate through the website. Out of these, the cookies that are categorized as necessary are stored on your browser as they are essential for the working of basic functionalities of the website. We also use third-party cookies that help us analyze and understand how you use this website. These cookies will be stored in your browser only with your consent. You also have the option to opt-out of these cookies. But opting out of some of these cookies may affect your browsing experience.
Necessary Always Enabled
Necessary cookies are absolutely essential for the website to function properly. This category only includes cookies that ensures basic functionalities and security features of the website. These cookies do not store any personal information.
Non-necessary
Any cookies that may not be particularly necessary for the website to function and is used specifically to collect user personal data via analytics, ads, other embedded contents are termed as non-necessary cookies. It is mandatory to procure user consent prior to running these cookies on your website.
SAVE & ACCEPT